I think a summer of Beefeater gin and tonics is staring me straight in the face.
Go Sox.
Done.

My Apartment May Have Been Without Heat and Electricity Last Night, but it’s All Right Because it’s Motherf#$%ing Truck Day.

That’s right folks; Truck Day is here, and no matter what the weather is like (it’s been warmer lately), that means spring is just around the corner.

It is only 5 days until the four best words of any winter: Pitchers and Catchers Report. The Boston Red Sox are headed into the spring in as strong a position as they have been since 2007 and look to be the favorites on paper. Guys are already reporting to Ft. Myers and the Truck is leaving today, but I can’t say that I’m 100% comfortable with the way the Sox are heading into the season.

Most years we could say the same thing, but this season has a question mark that hasn’t been there for quite a while, the spectre of large scale injury worries. Last season, the Sox won 89 games with a club that was led by J.D. Drew. Led and Drew are two words that should never go together, but that was because of the injuries that took out half of the lineup. This year, everybody is supposed to be healthy, and that may be the case, but with four of the top five guys in the lineup coming off off of injuries (Ells, Pedey, Youk, Gonzo) and the entire  infield less than 100%, I am tempering my expectations. (Except for the fact that I get a boner every time I try to figure out this year’s Sox lineup.)

Who the hell cares though. It’s Truck Day, and right now, all is right with the world.

Only 27 days, 15 hours and 12 minutes until pitchers and catchers report. 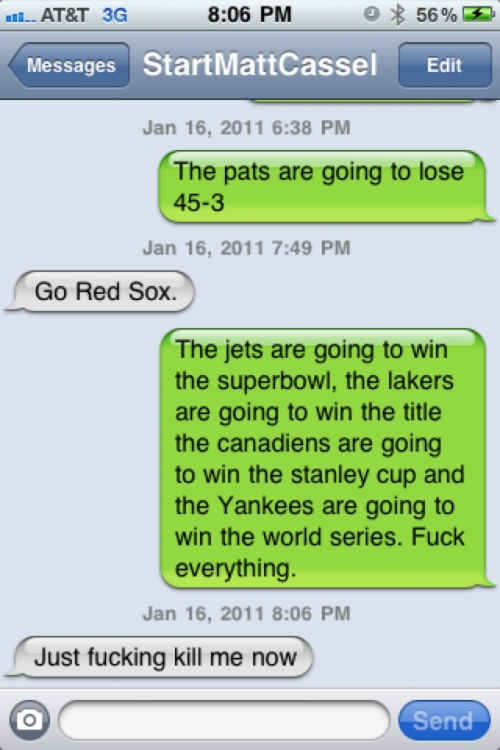 Filed under Blprk Txts, Things other than baseball

Carl Crawford, Adrian Gonzalez and the Red Sox: How Do YOU Spell Juggernaut?

With Crawford and Gonzalez in the mix, this should be a common sight around here soon.

Theo Epstein has given me a reason to write again.

Actually, he has given me two of them.

With today’s announcement that the Red Sox signed Carl Crawford, and last week’s trade for my long time man-crush, Adrian Gonzalez, the Sox are back. They have shifted the balance of power, stolen the thunder from a 10-2 Patriots team (by the way Rex Ryan, did you know that fist can be a verb?) and banished the championship contending Celtics and Bruins to the second page of the sports section. Once again this is a baseball town and the general malaise that had settled in at the end of last season is officially so gone that I have completely forgotten that anything between Papelbon entering in the ninth inning of game three of the ALDS in 2009 and when I woke up to the joyous news Saturday morning.

Now I know what all of you Christians have been saying about Christmas morning, but this was better.

Gone are the injuries, the worries, and watching Eric Patterson and Danny Nava playing in big games for the Sox. Gone is the f@#$%ing bridge year, and gone is the small market mindset. The Red Sox have flexed their muscles and now the rest of the league has to be afraid.

The best part of today was that I gave my students a pop quiz so that I could read all of the coverage, watch the video of Cashman shaking his head and imagining the price tag on Cliff Lee, who the Yankees absolutely must get, and above all, play with the lineup. Just picturing a lineup with a healthy Youk and Pedey, Ellsbury (I still think he’s the king of the Pink Hats) and Crawford terrorizing the basepaths, and Gonzalez chipping paint off the monster on a daily basis is making me smile and count the days to Pitchers and Catchers (66). After many hours of work (while I was supposed to be educating children), I have come to the following lineup: 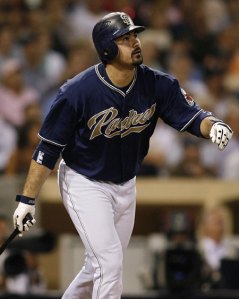 Drew (only one more year, RF),

This way there are three on base guys in front of Gonzo and Youk, allowing them to drive guys in, and it keeps a semblance of the right-left pattern that Tito likes to keep in order to prevent other teams from using a specialist on the heart of the order. It is worth mentioning that both Gonzo and Craw (I’m auditioning nicknames, feel free to contribute) hit lefties very well and that Gonzo absolutely crushes everything, including the souls of people named Steinbrenner. There is also potential for Salty to continue to develop and move up in front of Drew in the order, furthering Tito’s right-left desires (both of the catchers are switch hitters).

Oh, and have I mentioned that the three and four pitchers in our rotation are as good, if not better than most other team’s one and two? Yeah, Beckett is looking like he is going to come out pissed off at all the people who said that he shouldn’t have gotten the extension last year and Lackey will be the same way at us (and I say us, because I am one of these people) and come out firing.

The bullpen is the only question left (other than who bats where in the lineup and how many games we win the east by), headed by the nutcase who is in his final year with the Sox and must show up big for the big contract that he wants. Bard is solid and getting better (look at what he did to lefties last season, and that’s as a righthander), and the rest of the pieces…. well…… I trust in Theo.

He’s gotten us this far.

The End of a Long National Nightmare

The look on A-Rods face almost makes up for how bad Beckett and Drew sucked this year.

Wow, I never thought I’d appreciate anything from Texas as much as I do the Rangers this morning.

In case you missed it, the Rangers finally put down the Yankees (like the ugly dog at the shelter who never gets adopted. (Note: I do not mean that the senseless killing of these animals is a good thing, like the Yankees losing, but just that they did it in a similar undeniable fashion.)) last night by finishing them off in game six of the ALCS. Along with being the first time the Rangers have punched a ticket to the World Series in their 49 year history (originally as the second team to bear the name Washington Senators), it frees us from one more week or, god forbid, an entire winter of endless Yankee talk. No A-Douche on Letterman, no talk of Joe Girardi changing his number again (he had 27 last season and after winning the title changed to 28, kind of like Rick Fox wearing number 17 after going to the Lakers because he had been so disappointed to never win Banner 17 for the C’s), no Sports Illustrated special edition commercials about the Yankees. It comes as a relief to us all.

To the Sox, and their fans, this means that we can finally focus on the offseason and plans for 2011. While the Globe and Herald have already run their lists of potential free agent targets and decisions that need to be made by the Sox (mention must be made of the terrific prognostication and reporting done by Gordon Edes in his ESPNBoston.com blog), the fans, such as myself, have been focused on supporting the Twins and Rangers in their hopes to prevent another title by those pinstriped assholes to the south.

In the coming weeks we will have plenty of time to preview what figures to (and had f#$%ing better) be a very busy Hot Stove season for Theo and Co, but for today let’s just enjoy all of the video of the Yanks walking off the field looking dejected and miserable and look forward to what is undoubtedly going to be an amazing matchup in game one of the World Series, Lee at Halladay or Lincecum.

It’s An Off Day, So I Can Forget About The Red Sox for A While.

Did you ever think I’d write that? Me either, but here we are, with three weeks left in the 2010 baseball season, and I need a break. I can’t stop watching all nine innings every night, but it’s more like rubbernecking at a car accident than really watching with any hope. I’m curious about the kids, and trying to figure out what should happen with Ortiz and all of the old guys, but the passion just isn’t there. Basically watching the Sox crumble with injuries to the hitters and inconsistencies among the pitching staff (how ya liking Colorado, Manny?) has made me hate myself.

In an attempt to make myself forget about the pain in the ass that is the slow death of the Red Sox, I have turned to another source of daily entertainment, the NFL. The problem that I have always had with the NFL is that there isn’t enough daily action. So, in the midst of the too-little-too-late beatdown that the Sox were throwing at the Rays last night, SMC and I participated in my first ever fantasy football draft. I’ll say this, it was boring. With a 16 team league and all of the tools that the Mothership (we decided to do it through ESPN) there wasn’t much excitement to it. Either take the best guy available or the best of whatever you need, but the research, analysis, and most of the decision making was already done for me.

As it turns out, the later rounds get kinda thin (though it did allow me to pick up both the Law Firm, BenJarvus Green-Ellis, and LeGarret Blount, who I can depend on to get some points for punching people) but over all my asst. GM (MVPork) and I are pretty happy with the way things turned out. Maybe this will keep my mind off the fact that it is still about five months until baseball gets exciting again (the Hot Stove is too intermittent).

Today is an off day, so enjoy tonight (good yontif to those members of the tribe out there) and I’m taking the Saints (-5) over the Vikings to start the season tonight.

Filed under Baseball, Things other than baseball

Get Out of My Ballpark
Create a free website or blog at WordPress.com.