Category Archives: Things other than baseball

Only 27 days, 15 hours and 12 minutes until pitchers and catchers report. 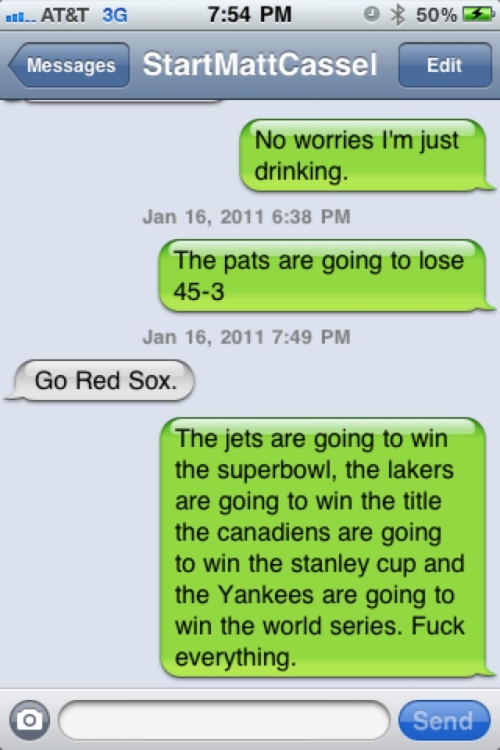 Filed under Blprk Txts, Things other than baseball

It’s An Off Day, So I Can Forget About The Red Sox for A While.

Did you ever think I’d write that? Me either, but here we are, with three weeks left in the 2010 baseball season, and I need a break. I can’t stop watching all nine innings every night, but it’s more like rubbernecking at a car accident than really watching with any hope. I’m curious about the kids, and trying to figure out what should happen with Ortiz and all of the old guys, but the passion just isn’t there. Basically watching the Sox crumble with injuries to the hitters and inconsistencies among the pitching staff (how ya liking Colorado, Manny?) has made me hate myself.

In an attempt to make myself forget about the pain in the ass that is the slow death of the Red Sox, I have turned to another source of daily entertainment, the NFL. The problem that I have always had with the NFL is that there isn’t enough daily action. So, in the midst of the too-little-too-late beatdown that the Sox were throwing at the Rays last night, SMC and I participated in my first ever fantasy football draft. I’ll say this, it was boring. With a 16 team league and all of the tools that the Mothership (we decided to do it through ESPN) there wasn’t much excitement to it. Either take the best guy available or the best of whatever you need, but the research, analysis, and most of the decision making was already done for me.

As it turns out, the later rounds get kinda thin (though it did allow me to pick up both the Law Firm, BenJarvus Green-Ellis, and LeGarret Blount, who I can depend on to get some points for punching people) but over all my asst. GM (MVPork) and I are pretty happy with the way things turned out. Maybe this will keep my mind off the fact that it is still about five months until baseball gets exciting again (the Hot Stove is too intermittent).

Today is an off day, so enjoy tonight (good yontif to those members of the tribe out there) and I’m taking the Saints (-5) over the Vikings to start the season tonight.

Filed under Baseball, Things other than baseball 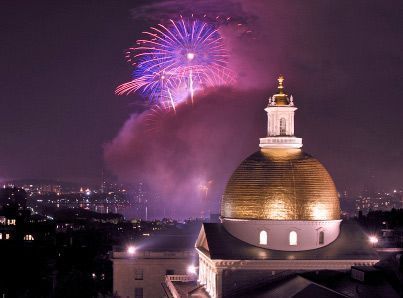 On April 19, 1775, a national spirit was born (yeah, we started that, you’re welcome). A year and a half later, the Declaration of Independence gave us our national birthday. Since then, America has been kicking ass and taking names from coast to coast.

Today, celebrate the way our forefathers would want us to, eat charred red meat, drink heavily and blow stuff up.

Filed under Baseball, Tales from the Bandwagon, Things other than baseball

US Advances in World Cup on Landon Donovan’s Goal in 91st Minute: You Can All Thank MVPork

Right now, this is so not gay.

After the most exciting soccer game I’ve ever watched and cared about, I got this letter and had to share it with you all. Ladies and Gentlemen, MVPork.

First off, I just want to thank all of my fans, family, friends and most of all the Good Lord J.C.  I will try to respond to all requests for autographs, but I ask that my public remain patient, as the onslaught is likely to be huge.  And if you’re wondering at all what has prompted this frenzy of interest in a heretofore little known football fan in the outskirts of Boston, it is this: I assisted on Landon Donovan’s goal in injury time today, the difference-maker between yet another first round ouster and winning Group C at the World Cup.

How, you may ask, is this possible?  Interestingly, I did not even start watching the game until the 86th minute.  I was meeting SMC and some business contacts for lunch in Cambridge, arrived a little early and wandered into the bar area where the game was prominently displayed.  No major action in the few minutes we were watching, except for a great, deep run by Edson Buddle followed by a pass that my club-footed cousin could have executed better, seemingly blowing the US’s last legitimate chance.  The business folks who were meeting us for lunch had not yet arrived, and I did not feel like dealing with having to void in the middle of a meeting, so I told SMC that I was heading for the pissa.

He noted that there were only a couple of minutes left in the game – wasn’t I afraid I might miss something?  I responded coolly that I was the only hope for the US side – only if I wasn’t watching did they have any chance to score.  Sure enough, within seconds of shaking off, I heard the roar from the bar – Donovan had blasted the US into the second round.

As for what the future holds, I am currently in negotiations to not watch the Red Sox for the rest of the season, and Tiger’s people have contacted me about staying away from golf for a while.  However, as long as the US has a chance to bring home that silly statue that looks like something my nephew made in the garage with duct tape, a tennis ball and gold spray paint, I choose country.  Viva USA!  Viva Landonovan!

As great as the win was, it comes with the pall of a Red Sox loss last night, when I learned that going to concerts (last night I was at Phish) is not good for the Sox, and tonight they’ve got to deal with Ubaldo Jimenez, who is really, really, really good.

Jeremy Roenick is a Crying Baby, Just Like Tim Tebow

Everyone is calling Mike Millbury an asshole for this one,  but that’s what you get for throwing your broadcast partner under the bus for calling the Russian hockey team “eurotrash.”

Filed under Things other than baseball

Jack Nicholson is a shitbag.

More on the Sox tomorrow. Tonight we’ve got the finals.

Filed under Team Green, Things other than baseball

Goodbye to one of America’s great actors and the man who gave us easy rider.

Filed under Things other than baseball

Get Out of My Ballpark
Blog at WordPress.com.